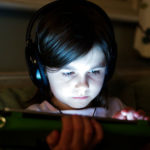 Could Technology be Putting you (and your Child) at Risk?

The technological advances that have occurred in recent decades have seemingly made life significantly easier and generally better. We can cook rice in a matter of a few minutes, rather than the usual 30-40. We can whip out an email faster than the mailman can unlock the mailbox, virtually rendering “snail mail” useless (except for that Amazon order). With all this technology, though, there is bound to be some repercussions, isn’t there? The answer is yes, in more ways than one.

The Hazards of Smartphones and Other Devices
In recent years, we have seen several different risks associated with the perpetual use of smartphones and other devices. Perhaps the one downside that has gotten the most attention is the fact that we have essentially rendered a good percentage of the population inept at face-to-face interaction. But this is not the focus of this blog. What we want to point out is the research tying the use of small devices to higher instances of dry eye in school-aged children. We surmise that the condition would be just as prevalent in any teen or adult who is glued to a screen several hours a day.

The Korean study that was conducted a few years back had just under 300 children who participated. Each child was classified based on having normal eye surface, moist eyes, or dry eyes. A questionnaire was completed by each participant, stating how much time was spent using various devices, such as television, smartphone, computer, and gaming devices. These were separated out into individual categories.

What the study found was that 71% of children who fell into the dry eye group used a smartphone, versus 50% of those in the group of moist eye surface (which was the control group). It goes without saying, but we will, that the more screen time a child had on a small device, the worse the dry eye condition. Interestingly enough, computer use and television viewing had no bearing on the moistness of the eyes. Researchers who conducted this study concluded that smartphone use should be recognized as a risk factor in dry eyes in children.

Are you struggling with the discomfort of dry eyes? We can help. Contact our office for an exam and consultation regarding treatment.